Tom has been around square dancing all of his life.  His parents, Lee and Lucy Manning had been dancing many years before Tom was even born.  As he grew up, instead of getting a babysitter, Tom went along to the dances and sat on the sidelines just watching everyone else dance.  One night at the Circle Square B Square Dance Club in Burlington they were starting a beginners’ class.  For some reason there w5ere about two squares of youth there with their parents.  When Lee asked Tom if he wanted to take lessons, Tom didn’t know any better and said yes.  That was in September of 1970 at the age of 8, and has been in the square dance activity ever since.

Dancing wasn’t enough for Tom.  In the fall of 1974 Don Roberts, a caller from Cedar Rapids, Iowa, was calling a dance at the club with Tom in attendance.  After one of Don’s tips, Don started talking to Tom and told him, he danced just like a caller, and gave him a record to learn.  The calling bug had hit.  By the spring of 1975 and at the age of twelve Tom was calling guest tips around Southeast Iowa.

Tom called full time for about 15 years starting in 1984.  He traveled extensively from California to Florida doing dances, weekend and festivals.  Tom has called in approximately 40 states, including Hawaii.  His travels have also taken him to Canada and Mexico.  He now tries to stay closer to home as his family has become his number one priority.  He calls for a plus club, the Circle Square B Promenaders in Wever, Iowa, has an advanced workshop group in Mt. Pleasant, Iowa and has just started working with Jerry Story and Robin Ragen in a club 50 program and Extended Application group in Fairfield, IA.

Although Tom has limited his travels, he will call specials and festivals on weekends a little farther from home.  Tom owns and produces Solid Gold Records and is partner with Bob Asp in Solid Gold Sound, providing sound for State Conventions and area festivals.  He has also recorded on Cross Country, Chicago Country, and Yellow Rose records.  He is a member of CALLERLAB serving on the Mainstream and Plus committees and the Applications Review Committee.  He is also a member of the Southeast Iowa Callers Association having held every office. 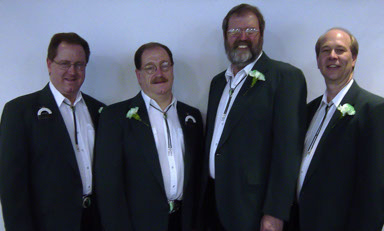 Tom graduated from Western Illinois University in 1984 with a Bachelor in Business and has received his Masters in Education from Ashford University.  Tom is now teaching at Burlington High School in the business department.  He hopes to use his influence to help get modern square dancing back in the schools.

Tom married his high school sweetheart, Ella in 1983.  Their dates consisted of going to Tom’s dances and lessons.  That is how Ella learned to square dance.  Ella has been employed by General Electric since 1995

They have three lovely daughters.  Sara, married to Jordon Bright and lives in Paris, Missouri.  She is the Youth Pastor at the First Christian Church in Mexico, Mo while Jordon farms.  They are the proud parents of Tom & Ella’s granddaughter, Nora is two.

Amanda teaches High School math in Bettendorf, Iowa.   She is engaged to Robert Butterworth with a December 2017 wedding being planned.

Ashley is married to Breck Dunne and lives in Myrtle Beach South Carolina.  She works at a day care center while Breck is employed by Myrtle Beach International airport.